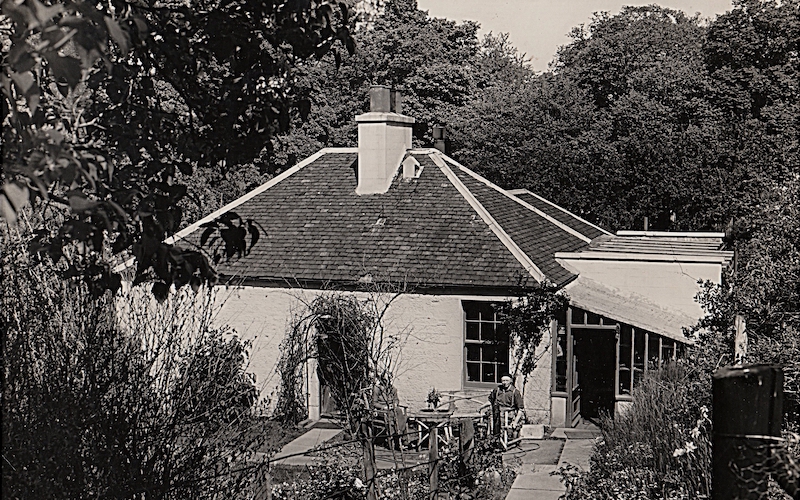 With thanks to Inez Visser of Musselburgh, we are pleased to share the wonderful story of her grandfather, who lived in the 1950s in a former coachman’s cottage on the Dalhousie Estate in the Cockpen area.

With thanks to Inez Visser of Musselburgh, we are pleased to share the wonderful story of her grandfather, who lived in the 1950s in a former coachman’s cottage on the Dalhousie Estate in the Cockpen area.

You can read 3 newspaper clippings that help to tell the story here:

“That’s where the captain drops anchor” 1955

“It’s rather quiet around Cockpen”

Biography of Capt. Jan Eltjes Visser and Jane Anne Pennet of “Dutchman’s Creek”, located  on the South Esk next to old Cockpen Church

Captain Jan Etjes Visser was born on the small Dutch Friesian island of Schiermonikoog in 1892.  Although a tiny island the size of Eigg it had a small nautical college and by the start of the First World War Jan Eltjes already had his Third Officer’s ticket.  In 1915 he was Third Officer on board the SS Katwijk, which was torpedoed; fortunately the crew survived as they were able to seek safety on board the light ship Noord Hinder.

Jan Eltjes married Ida Klazina Teensma also of Schiermonikoog in 1918 and together they had four sons.  He continued with his nautical studies, returning to the island college to study and be assessed for each grade and by the time of the Second World War he was Captain of the SS Reggestroom of the Holland West Africa Line.  In May 1940 the Nazis invaded the Netherlands and his ship, like many others, was cordoned off on the North Coast of France.  Capt. Visser then navigated Reggestroom  bit by bit back to Bordeaux.  By June in the ensuing crisis at the invasion of France he was commanded to take 400 refugees to England and on route while docked at Le Verdon another 100 refugees were boarded.  They survived an aerial attack in Le Verdon and a couple of days later arrived safely in Falmouth where their ‘cargo’ of refugees of many European nationalities were discharged.

Documents of the ensuing war years are not in the family records but it seems that SS Reggestroom assigned to a British flag rather than be surrendered to the Nazis.  Capt. Visser’s eldest son died tragically in 1939 in a ship’s fire on board the MS Jagersfontein and in 1943 his wife Ida Klazina died; his surviving three sons were looked after by family members in the Netherlands during the final years of the war.   In April 1944 and now residing in Edinburgh, Capt. Visser married Jane Anne Pennet,  she is recorded as  having the catering licence for Nicholson’s restaurant and in June 1945 she and her new Dutch husband bought Nicholson’s restaurant for £1000.

Not much is known of Jane Anne Pennet, she was from Mull and a native Gaelic speaker and had two brothers and sister.  Her brother Louis Pennet was station manager of Queen Street Station, Glasgow up to the early 1960’s.   There is no documentary evidence tying up the time that she sold the restaurant but by the time her step son, Jeppe Ino,  married in 1951 she owned a guest house in East Hermitage Place, Leith.

After the war Capt. Visser continued to skipper ships of the HWAL, meanwhile his youngest son, Jeppe Ino, was brought to Edinburgh to study at the Leith Nautical College.  By the early 1950’s Capt. Visser was given the prestigious contract of sourcing a small vessel to be recommissioned as a presidential yacht for the then President of Liberia, William Tubman.  Capt. Visser was, for a short while, skipper of the vessel renamed “ MY President James Roye”  but the onset of a heart condition in 1952 forced early retirement.

At this point the couple bought the small piece of land and the derelict cottage on the Dalhousie Estate on the South Shore of the river as it passes the castle and they set about restoring the cottage and reinvigorating the garden.  They called their new home “Dutchman’s Creek” and on June 11, 1955 a centre piece article was written about them in the People’s Journal.  Just two years later their idyllic life started to fall apart quite literally as the cottage was undermined by blasting which shook huge cracks into the walls.

Capt. Visser died in May 1958.  The land was bought by the National Coal Board, the cottage was demolished and the NCB used the land as a mine bing.  Jane Anne Pennet returned to East Hermitage Place, Leith and died in 1963.

For many years the remains of Dutchman’s Creek sat low next to the huge smouldering pile of coal slag but now the land has recovered with natural reseeded woodland and is a woodland gem which can be walked through.